Andrea Love’s pursuit of singing began at age 3 in liturgical choirs, followed by classical piano and clarinet studies at age 8. She began arranging and orchestrating piano pieces for her school band at age 11, and composing original classical piano pieces at age 14. Her love of world music took her around the world to study genres ranging from Irish sean-nos ("old-style") singing, to African rhythms, Balkan traditional singing, and more. She's an award-winning singer in Irish Music Competitions around the US, in addition to being an accomplished vocalist, multi-instrumentalist, and songwriter. Decades of experience performing in musical theatre productions lends an added depth and perspective to her teaching practice. She frequently contributes her voice and songwriting skills to recording projects both locally and nationally.

Andrea's number one passion is singing and helping others learn to sing while also enjoying the process. In her teaching, she uses both Classical and non-classical techniques, along with vocal pedagogy, vocal science, and an understanding of how the brain learns and retains new skills to help you discover and refine your musical voice. Drawing from both "real world" experience and her formal studies she helps you take your skills and performance to the next level, (while having a blast in the process, of course!) After all - it's all about YOUR next performance!

Andrea studied Classical vocal technique and traditional Irish singing at Georgia State University and University College Cork, Ireland. While pursuing her degree in music and voice, she studied privately for several years with instructors Karen Parks (The Studio for Vocal Refinement) and Valerie Walters in Atlanta, GA, and with John Grau and Joel Burcham at CU Boulder. 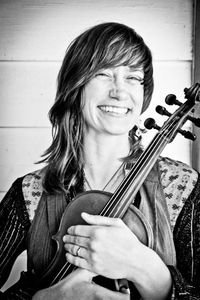 Enion Pelta-Tiller began classical violin studies at age 3, but her education was always supplemented by improvisation lessons from her jazz guitarist father. By 16 she had taught herself to compose impromptu melodies in styles from classical sonatas to East Indian ragas and jazz standards. Enion attended Peabody Institute in Baltimore, MD, working towards a viola performance degree, while also studying english at Johns Hopkins.

Eventually she landed in NYC, where she performed cutting edge music straddling punk, free jazz, and classical with various local musicians, and landed a gig with the crown prince of Hungary’s New Wave music scene, Menyhart Jeno, as the violinist in Mr Con and the Bioneers. She traveled to Hungary in the summer of 2001 to play the main stage at the Pepsi Sziget, Europe’s largest music festival, playing immediately before Run DMC and Morcheeba.

Upon her return she focused more on composing and performing the music she and her husband, David, had been working on together, and the two decided to make a life of it. They perform as the duo Taarka, and in her spare time Enion shares her love of music and the skills of her craft to local students.